Back pain (low back pain) is one of the most common health problems and basic dysfunction, causing deterioration of life and effectiveness of people at work. Pain at the waist may be acute (acute lumbago), underlying and chronic pain.

In the UK, the pain in the waist causes the most days of temporary disability among young people who have lost over 100 million business days [1]. In Sweden, according to a survey, the increase in days of incapacity was from 7 million in 1980 to 28 million in 1987 [2]. In the United States, the loss of working days is 149 million / year [3].

What is dysfunctional syndrome at the waist?

Dysfunctional syndrome at the waist is a normal body load on an existing abnormal tissue at the waist, which provokes symptoms.

Under abnormal tissue is meant all soft tissues in the waist area such as intervertebral disc, fibrous or non-functional tissue obtained after surgical interventions, tissue that has been inflamed and inadequately restored such as nervous root, etc., previously untreated periods of sciatica.

What is the clinical picture of dysfunctional syndrome? 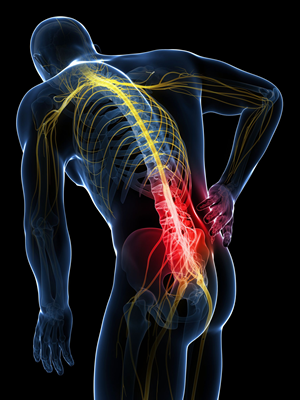 Unstable pain;
No time factor before the symptoms appear. For example, during the day, the patient was physically heavy and the next morning he could not get out of bed with severe back pain, time does not play a role in the onset of symptoms in dysfunctional syndrome;
Some of the movements in the waist cause pain in the final volume.

Compared to acute pain in the waist, we do not expect during the functional examination of the patient to find a restriction on the movement in the waist; there is one exception: tight nerve root (adherent nerve root).

What is a clinging nervous root?

Discroprocessing causing sciatic episodes, which has been reduced but after the recovery process there is some adhesion or adhesion remaining, which now hinders the complete mobility of the nerve root / dural complex;
Body Down / Laser Test (SLR) are slightly limited;
Pain in the extreme volumes of the movements at the waist;
This is the only dysfunction that can cause peripheral pain (lower limbs); all others listed above cause only back pain;
It may also be the result of post-operative adhesions for which neurosurgeons put a special gel during surgery.

What is kinesitherapy for dysfunctional syndrome?

The only way to solve the problem of dysfunction is the regular remodeling program that repeatedly stresses the tissue to return it to full functionality.

So, regular stretching in the direction of dysfunction is imperative.

However, the pain in the waist is not due only to dysfunctional syndrome, but much more often to compression of nerve structures from disk protrusion.

In case of dysfunctional syndrome, some lumbar movements provoke pain in the final volume. However, this may be a small lumbar disk protrusion?

How Do We Discern Dysfunction Syndrome From Disc Protrusion?

Testing by performing multiple repetitions of a certain lumbar motion of the often-bent down (flexion)!

What would happen in the presence of dysfunctional syndrome?

20 reps, e.g. of flexion from standing, 20 times provoke pain in the final volume of movement
After 20 reps: the test result is: no improvement, no deterioration, no change → ie. there is no change
What would happen in the presence of a disk protrusion that presses a nervous root?
20 reps again
Depending on the direction chosen, there is a deterioration or improvement during the performance of these 20 reps
After 20 iterations: possible improvement or deterioration → we have a change!
The pain in the waist is not caused only by the so-called disc herniation and prostration. Dysfunction syndrome is also possible. The correct functional diagnosis of the patient and the history of the problem can guide us to the correct hypothesis about the cause of the pain in the cross because the therapy for dysfunctional syndrome is different from that in the waist pain caused by disk prostruses.

Posted in Health
← A Simple Trick To Remove The Bad Smell Of The Pipes … Prepare It With Ingredients You Have At HomeFrom what to clean the house during spring cleaning? →